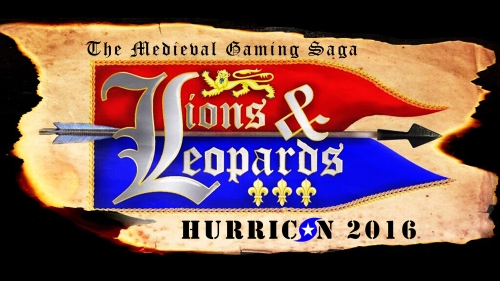 We just can’t wait to kick off Lions & Leopards and in just over two weeks at The Lakeland Role Playing Guid’s  August 12th game night we go to war!!! We will be presenting an exclusive preview which will introduce the setting through the story’s Prologue. Each game in the series is linked and the Prologue is no different. The game’s result will have an impact on the scenarios that will be played out at Hurricon 2016, so determining the fate of Loudun begins in just over two weeks!!

Ready to head the call to war? You can sign up through the LRPG forums or via the Facebook Page Event.

Scenario Description: “The siege of Loudun is under way. Lord Huntington has ordered that the countryside be aggressively foraged to give his forces the supplies they will need in the weeks to come. Paramount among the list of needed resources are geese, which the fletchers have indicated will be needed to keep the longbows supplied in the event of an assault. Meanwhile Lord Dufour, viscount of Loudun, has called for aide from his countrymen. The promise that the one who can break the grip of the English horde will have Claire Dufour’s hand in marriage has drawn the attention of an ambitious nobleman who has put together a sizable force. Using back country trails they have come upon a small farm where they decide to rest and refresh themselves and as the sun crosses its zenith they quickly find that the English have taken an interest in the very farm on which they stand. Rule set is Lion Rampant (modified), he can take up to 8 players (2 of which will assume overall command of a faction).”

While players won’t be able to play in every game of the event (some are taking place simultaneously) or may only wish to participate in one of the scenarios we did want to find a way of rewarding loyal men-at-arms by acknowledging players for their loyalty to the crown and recognize truly heroic deeds. To that end each player will be listed by the scribes in the roll call and each game will further reward players with Renown. At the end of the event, Sunday at Hurricon, we will recognize the player(s) who participated in the most games as well as the players that achieved the most renown!!!

Hurricon 2016 will be held September 22nd-25th. If you’ve never been to the convention check out our Hurricon Registration Guide and be sure to visit their website and Facebook page for more information.