The Lions and Leopards event includes seven, cross-platform games that each offer a complete game experience. Among those seven games are three role playing games for which we have already previewed. Now it’s time to delve into the other side of the coin, four miniatures games which will see large forces conflicting in the battle for the fate of Loudun.

Who’s Side are You on Anyway?

This scenario picks up where the Prologue game left off, with the French attempting to profit off their spoils. But, in the murky politics and intrigue of the 100 yrs war the caravan is not as safe as they believe. Heroes from both sides charge forth leading their retinues into a clash of competing motivations. Some fight for riches won, others for redemption. And all fight for glory and renown!!!

Players can expect a high intensity melee chock full of classic medieval action and even a couple twists along the way! Song of Blades and Heroes by Ganesha games is a nominee for the 2008 Origins Award “Best Miniature Rules”, fast paced and easy to learn. Take command of a mixed band of HYW archetypes to determine who will take the field and, most importantly, the prize!!!

Synopsis: “The assault on the town wall has been launched! Fight for the glory of England, the defense of France or take overall command and lead your faction to victory in this historically inspired battle set in the Hundred Years War.”

This scenario picks up on the day after the Sally of the Saboteurs RPG. The English have found themselves low on coin, supplies and in dire need to crack the walls and refill their coffers from the town’s riches. Just as the assault begins fate makes her presence known and the battle for Loudun suddenly seems less desperate to the English.

Players can expect a large scale battle where they will assume the role of a noble commanding one of three prongs of the English attack or defending a section of Loudun and making the foe pay for every yard with blood. One player from each side will also have overall command and control crucial assets and/or reinforcements. Who will live to fight another day? Only you and the dice can decide!!!!

Synopsis: “The town has been taken. As the French fortify the keep they watch through the night as the English burn and pillage, resisted only by a few bands of stalwart warriors. And amongst the chaos lurks those that would pursue their own agenda.”

As the sun sets on the Into the Breach scenario the ravaging of Loudun begins. The English will be fighting a semi-cooperative battle against the town’s defenders who have yet to seal themselves in the donjon and the peasants who were not worth of entry into the keep. The cover of darkness affords many possibilities and, before dawn, scores will be settled and fortunes saved or lost forever.

Players can expect a fast-paced, fun game experience for novice and veteran gamers alike. There promises to be lots of action, looting and side quests that will present challenges on the table and require interaction with fellow players with whom alliance will be as crucial to success as deception. It’s Pig Wars – “WHEN MEN WERE MEN AND PIGS WERE MONEY”!!! 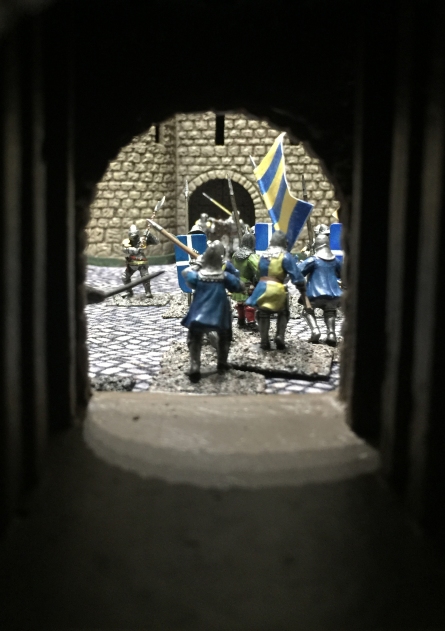 Synopsis: “The keep is under attack in the last, desperate measure by the English to conquer the town of Loudun. Who remains to lead the valiant assault and who remains to defend the honor of France? The players have set the stage and now it is time to determine the ultimate victor!”

It has been several days since the town wall was taken and time runs short. A French relief force has been gathered and prepares to advance on Loudun and the surviving defenders rally around their lord and prepare to make their stand. For their part the English know the time to act has come. Concentrating the fire for their war machines they have cracked the wall and are preparing for a final assault when, in the 11th hour, just as the surviving knights form up their retinues, they learn that there are a few more cracks in Loudun that can be exploited.
In the finale to the Lions & Leopards event players can expect to fight a close-quarters battle inside the castle courtyard, along its walls and even inside the donjon as they fight floor to floor for the ultimate prize – control of the keep! The fate of Loudun hangs in the balance and only YOU, the players, can determine who will be victorious in the battle between…

While players won’t be able to play in every game of the event (some are taking place simultaneously) or may only wish to participate in one of the scenarios we did want to find a way of rewarding loyal men-at-arms by acknowledging players for their loyalty to the crown and recognize truly heroic deeds. To that end each player will be listed by the scribes in the roll call and each game will further reward players with Renown. At the end of the event, Sunday at Hurricon, we will recognize the player(s) who participated in the most games as well as the players that achieved the most renown!!!